Based in Los Angeles, Audyssey specialises in audio processing software. This is used in home theatre equipment such as multi-channel receivers, and also finds its way into TVs, mobile devices and cars. In 2010 Audyssey started making its own audio accessories, with an iPhone/iPod dock which I reviewed here. I was surprised how good they sounded. Since then I have kept a close eye (or ear) on the company’s small range of products. This is a company which cares about sound quality, and whose secret sauce is applying software to solve the problem of getting big, accurate sound from small enclosures.

The Lower East Side Audio Dock Air is an active loudspeaker system for Apple’s AirPlay wireless streaming protocol. It also has a standard 3.5mm input for wired connection to MP3 players or other devices. Using AirPlay, you can play music and control the volume from a Mac or PC running iTunes, or from iOS devices including iPhone, iPad and iPod Touch. 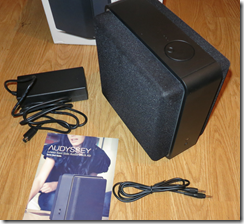 What you get in the box is the Audio Dock Air, an external power supply, a 3.5mm jack connector, and a Quick Start Guide that unlike many others is actually rather good.

The styling of the Dock Air is distinctive with its speaker systems firing left and right, though if you check out the internal shots later on you will see that the tweeters are actually directed more forwards than sideways.

Plug in the power and you can get started. For set up, you press and hold a pairing button on back, which lets you connect to the Dock over Wi-Fi. You than browse to a small web application on the Dock, where you complete the set up by connecting to your home Wi-Fi network. You can also rename the device, which could be particularly useful if you have several Dock Airs in different rooms.

Once fully connected, you can go to iTunes and click on the AirPlay button at bottom right of the iTunes window. There you can select the Dock Air, using whatever name you assigned during setup:

Even more convenient is to download the Remote app for iOS. This lets you use your iOS device to control iTunes on the Mac or PC. 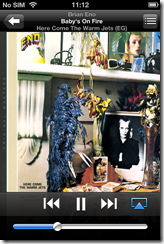 You can also play music directly from iOS.

The sound quality is excellent as I have come to expect from Audyssey. There are a few points to note though. The first thing you notice is the bass extension, which is remarkable for a unit of this size. Drums have real thump, and bass guitar sounds like bass guitar. If you are used to the anaemic bass of most small speakers, hearing this from a small box is pleasing and unexpected. That said, the sound is not dominated by the bass. The treble is sharp and clear too; and I was struck by how easy it is to follow different strands in the music and to notice small details.

Playing Carly Simon’s You’re So Vain, for example, you can easily hear the whispered “Son of a gun” right at the start of the track. Karajan’s Beethoven’s 9th sounds dramatic and powerful; a little lightweight compared to a full-range home stereo, but superb from a compact dock. Mika’s Billy Brown, a simple arrangement with a forward vocal, is conveyed with drama and deep bass from the accompaniment, with just a trace of confusion at the bottom end compared to my monitor reference speakers.

Given that this is a single box, you should not expect the best stereo image. You do get some limited stereo effect. The unit goes loud enough for most listening at home, but not for parties or neighbour-annoying rock out sessions,

I made a comparison with the Audyssey South of Market dock, which is just a little larger but a similar design. The older dock does not go quite so deep, though the sound is a shade cleaner; the Dock Air is slightly softer in tone though if you had your eyes closed you would guess it is larger, not smaller, than its predecessor. On Sade’s bass-heavy song By Your Side, the South of Market keeps a firmer grip than the Dock Air, though this is a difficult song to reproduce. Some listeners might find the bass in the Dock Air excessive, though it is not to my ears. I doubt anyone would think that of the South of Market dock. Both sound very good.

The not so good

Audyssey has a strong grip on audio technology, but less so with its manufacturing quality. It is not bad but could be better. The rotary volume control is slightly out of true on the review unit, for example. These are products that you have to hear to appreciate, and my guess that a little more investment in fit, finish and design would win more customers, bearing in mind the relatively high prices.

The responsiveness of the Dock Air can be laggy, both from iTunes and even more when used with the iOS Remote app. Some of this is down to the iTunes/AirPlay system, and no doubt some audio buffering in the Dock Air, but it can be annoying.

The Dock Air is fairly minimalist when it comes to switches and ports. On the top of the unit is a rotary volume control and status LEDs. 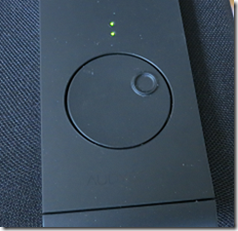 You can also control volume remotely, which you will probably do more often. The volume control is also a mute button; press down to mute, and again to unmute.

On the front is a headphone socket along with what looks like an infra-red receptor though if so it is undocumented. 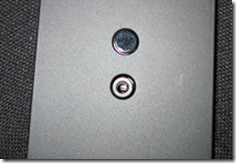 At the rear is the power, aux input, and pairing button. No on/off switch. I recommend turning off at the socket, connecting, and then switching on, presuming your mains sockets have switches. 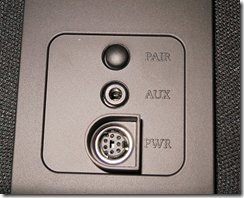 Underneath is a USB port, which Audyssey says is solely for future firmware updates. 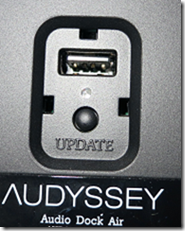 Audyssey does not give much away in its specifications for the Dock Air. It does state:

Of these, the last are the most interesting. What are they?

Audyssey EQ is not much documented, but in the context of another product I read that it corrects time and frequency response imperfections caused by the loudspeaker and cabinets.

BassXT “dynamically monitors the low frequency signals and constantly pushes the speaker to its maximum capability.” The over-simplification would be that it boosts the bass signal to compensate for the drop off in the frequency response of the woofer.

Dynamic EQ is a more sophisticated form of the “loudness” switch that you see on old hi-fi equipment. As Audyssey says, “It will preserve the and octave-to-octave balance of the content as you turn down the volume to make up for the changes that happen in human hearing at lower listening levels.”

Purists may feel that this is too much tinkering with the signal. My view is that the high quality results successfully validate the approach. With Audyssey products, it is a large part of what you are paying for.

The Dock Air is not designed to have its grilles or panels removed; however we had a quick look inside for this review. This shows one side of the unit with its 3” woofer and passive bass radiator. 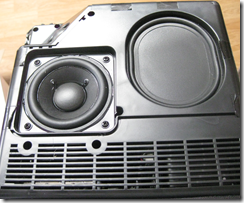 If you look carefully you can also see the tweeter at top left. Note that this points more towards the front than to the sides, though it is at an angle. 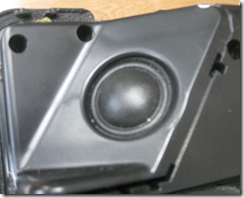 Internally Audyssey has taken a lot of trouble with acoustic damping foam so that the sound is clean even at high volume. I was also impressed by the size of the loudspeaker magnets, which are bigger than I have seen on speakers many times larger. 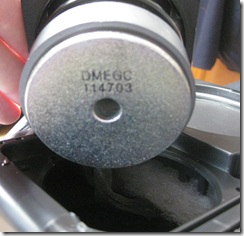 With rumours that Apple is redesigning its dock connector, thus threatening the compatibility of products like the South of Market dock, wireless is the future. If you value high sound quality and need an AirPlay speaker system, you will like the Lower East Side Audio Dock Air. Note that there is no Bluetooth support, so if you want to use non-Apple devices this is not suitable. A bit more attention to design and manufacturing quality would be welcome. But I do not know any other company that can get such great wide-range sound out of small boxes.